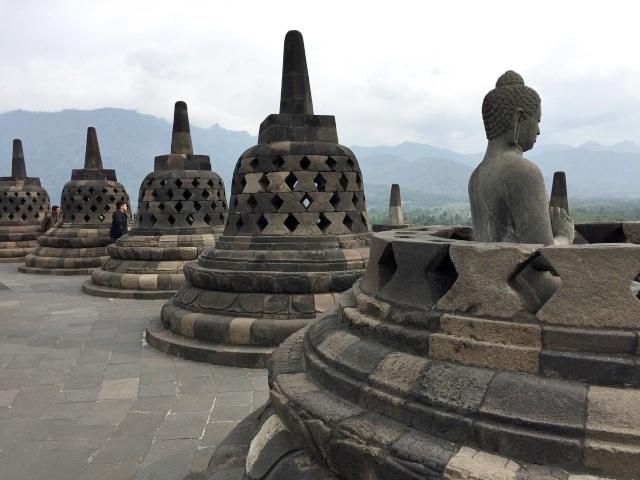 Borobudur temple is a famous tourist attraction near Yogyakarta, Indonesia. It was built around the year 800 AD by the Syailendra dynasty. Several theories are explaining of Borobudur’s name and one of the names comes from Sambharabhudhara Borobudur, which means holy place on the mountain.

There is some other folk Etymology, that Borobudur derived from the words of Buddhas due to shifting the sound to Borobudur. Another explanation comes from 2 words namely Bara and Beduhur. There is another explanation that Bara came from Sanskrit, which means a temple or monastery complex and means beduhur. Historian J.G. de Casparis found Borobudur is a place of worship. According to the inscription Karangtengah and Kahulunan, Casparis predict who has founded the Borobudur temple is the king of the Syailendra dynasty named Samaratungga, who did the construction in 824 AD.

Built a new temple and it could be completed by the time her daughter, it was Queen Pramudawardhani. Borobudur Development is expected to take 50 years. In Karangtengah inscriptions also mentioned the bestowal of land free by Ç.R Kahulunan Pramudawardhani. The location of Borobudur temple is on Manoreh hill, stretching from east to west. At the east part is mount Merapi and Merbabu and at the west part, there are mount Sindoro and Sumbing.

It is made from equivalent andesite blocks with 90.000 square meters to build the temple. The overall weight of the temple reached 5.5 million tons. Like most temples, Borobudur has 3 parts, namely the legs, body, and top. At the foot is called Kamadhatu, which tells the story of a life filled with lust and bestiality. The middle part is Ruphadatu, which describes a level of consciousness that is still bound to lust, material, and shape. The third is Aruphadatu, material, and shape depicted in the form of empty Stupa. This is the only can be achieved with desire and emptiness.