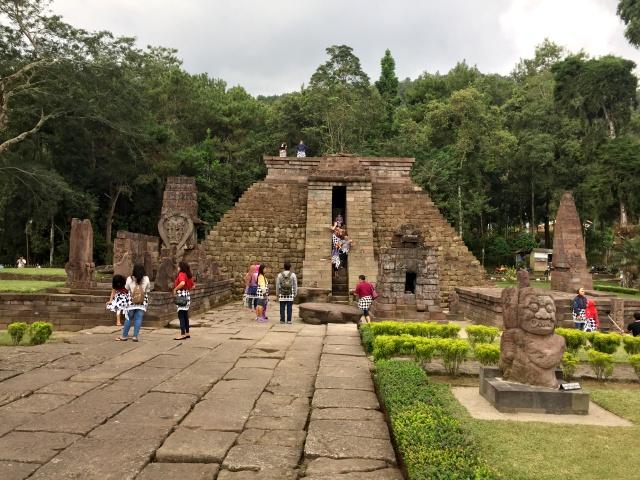 Sukuh temple is located on the western side of mountain Lawu, precisely in Berjo village, Ngargoyoso, Karanganyar regency. Sukuh temple is at an altitude of 910 meters above sea level. Sukuh was found in a collapsed state in 1815 by Johnson, a resident of Surakarta reigned by Raffles. Then Sukuh was studied by Van Der Vlis in 1842, and Van der Vlis reported the results with the book title of Prove Eener Beschrijten Soekoeh op en Tjeto. Research temple was followed by Hoepermans from 1864 until 1867 and reported in his book Hindoe Oudheiden van Java. Later in 1889, Verbeek held Sukuh inventory of the temple and continued with research by WF Stutterheim and Knebel in 1910.

The temple was built in the late 15th century AD. The architecture of Sukuh slightly deviated from provisions of guidelines in the book manufacturing Hindu shrine of Wastu Widya. According to the rules, the temple should be laid out on a square base with the holiest place situated in the middle. Irregularities allegedly caused Sukuh to build during the waning influence of Hinduism in Java. It seems to revive local cultural elements of the Megalithic era. The effect that could be seen from the prehistoric era building form is Sukuh terraces. The forms of temples like Punden building terraces are characteristic of sacred buildings in the pre-Hindu. Another distinctive feature shrine of pre-Hindu is the holiest place situated very high.

Supposedly, experts, Sukuh built for the purpose, which is to deter bad forces that affect a person's life due to certain characteristics they have. The assumption is based on the reliefs containing re-care stories, such as Sudamala and Garudheya, statues of turtles and eagle contained on Sukuh temple.