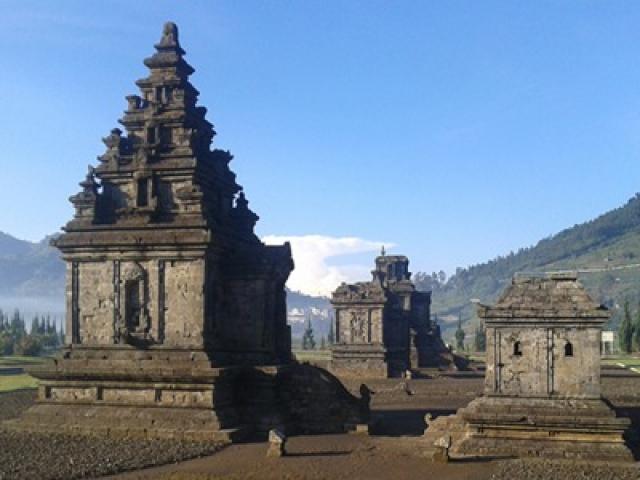 Dieng is a place of Hindu temples where located on the mountain. Dieng complex Hindu temple occupies a plateau at an altitude of 2.093 meters above sea level, extends from north to south about 1900 meters with a width of 800 meters.

The Dieng temple was built in the early 7th century AD and it is the oldest Hindus temple in Java. Experts estimate the Dieng temple was built by the Sanjaya dynasty. In Dieng was discovered a stone inscription dated 808 AD. It is the oldest inscription in ancient Javanese script. Shiva statue was found in the area around and is now kept in the National Museum in Jakarta. Dieng temple probably was built in 2 phases: the first phase began in the late 7th century AD, which includes the construction of Arjuna, Semar, Puntodewo, and Gatutkaca temples. The second stage is the continuation of the first phase, which was lasted in 780 AD.

The temple was discovered by a British soldier in the year 1814, he traveled and saw it was in flood. Van Kinsbergen led efforts to drain the lake where the temple is located in the year of 1956. Efforts drying followed by the Dutch Government in 1864, followed by recording and taking pictures by Van Kinsbergen. The Dieng temple is divided into 3 groups and 1 individual temple named after the character of the puppet story from Mahabharata. The three groups of temples: Arjuna temple group, Dwarawati group, Gatotkaca group, and one stand up the alone small temple of Bima.