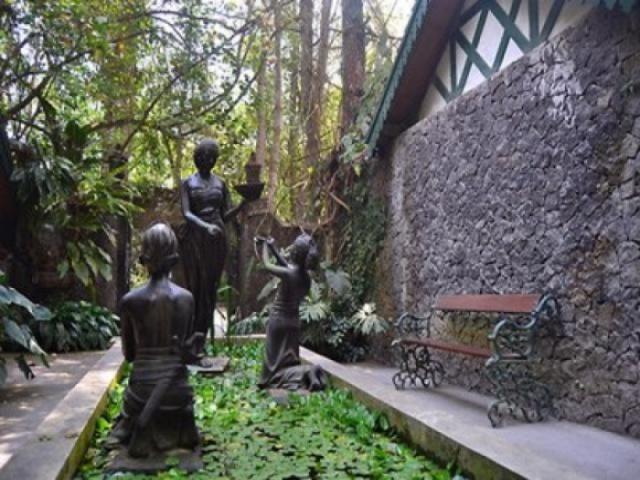 Ulen Sentalu is a cultural museum which is in the north part of Yogyakarta. The word means "Ulating Blencong Sejatine Tataning Lumaku" which means a lamp of the truly human life, built on the land area with cool air and beautiful amongst the thick foliage in Kaliurang, called Kaswargan Park (Garden of Eden). The construction using stone from the mountain and took many years before finally completed and inaugurated in 1997. The history of the Mataram kingdom of Yogyakarta and Solo will likely find its preoccupations while listening to the story. The goods on display in the museum were contributed by the daughter of Sultan Yogyakarta, Surakarta, Pakualaman, and Mangkunegaran. Some painting work of Yogyakarta Art university painter, who painted from an original photograph and there is also a direct contribution from the palace.

Ullen Sentalu has 7 rooms, the main entrance, Selo Giri cave, and another 5 rooms in Kambang village. When passing the entrance, shady paths and Selo Giri Cave meaning mountain stone cave. In the dungeon room can see some photos of Yogyakarta and several photos of former palace dancers in action. But do not mistake, despite the female characters on the dancers, but none of the dancers are women, because women were not allowed to dance in public. So, to replace the role of the youth that they are slim and lithe like a princess palace. The royal princess characters, that stands out, for example, Bray Partini Djayadiningrat, who authored the book "Ande-Ande Lumut" and first published by the Central Library with Antipurbani pseudonym.

Some photographs of Sultan family shots during Sultan Hamengkubuwono VII named Kassian Cephas. Some of the photographs depict a woman with a pose, that is considered daring at the time. Photo titled Denok depicting ordinary women posing on the couch with cloth covering the chest to knees. It was considered a bold pose for the ancient fabric that elevates women are strictly prohibited beyond 3 cm from the ankle.