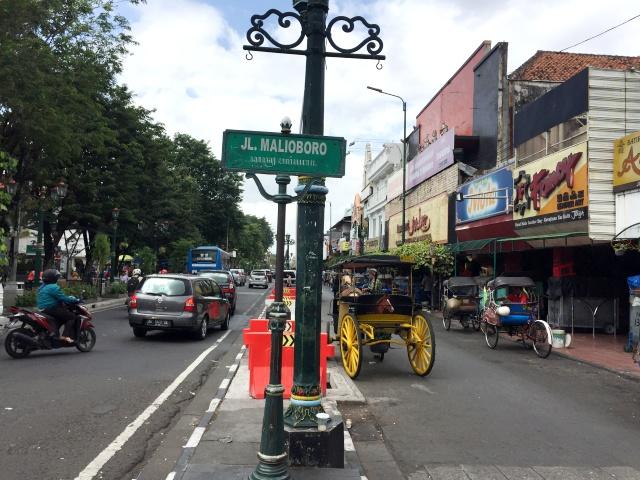 Malioboro Street was the witness of Yogyakarta history in the past time. The length stretches above Sultan Palace building, White Monument, and Mount Merapi. The street is the heart of Yogyakarta city and it keeps abreast of changing times. Malioboro's name believed taken into 2 versions of legendary, the first was taken from British nobility, namely Marlborough, UK resident in Yogyakarta at the year 1811 - 1816. The Second version from Sanskrit words meaning Malioboro wreath, because this place was filled with bouquet every time Sultan Palace execute celebration. More than 250 years, Malioboro has been transformed into economic activity through traditional market reigned by Sri Sultan Hamengkubuwono I. It was started from 1758 until now, Malioboro persists as a trade center and it becomes one of the faces representing in Yogyakarta.

Vredeburg was directly opposite to Court House, the building which is known by the name of Rustenburg built-in 1760. Perceived grandeur of Vredeburg first proposed by Dutch governors named WH Van Ossenberch, the premise of maintaining the stability of government security lane I. The Dutch Party for a 5-years waiting period to get approval from Sultan to improve Rustenburg Fortress. Construction of castle with European style by architect Frans Haak. Then the fort building was named Vredeburg, which means peace.

Along the Malioboro streets, visitors can enjoy the experience of shopping along the sidewalk. Plenty of Yogyakarta local handicrafts such as batik, Javanese head of Bangkok, rattan ornament, leather puppets, bamboo crafts, and silver. The shoppers get experience in bargaining price and get the different culture of how to shop.