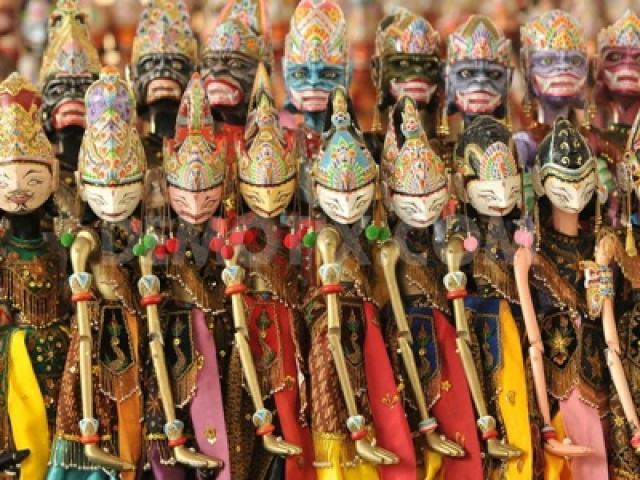 Puppet comes from the form of drawing characters and the stories can be seen clearly in mind drawing for source has been lost. At first, the puppet is part of pagan religion worshiping 'Hyang', which is done in harvest time or plant in Ruwatan ceremony, Tingkeban, or Merti to succeed the farming harvest and village protected from evil.

In the year of 898-910 AD, wayang is a puppet prototype yet still devoted to the worship of Sang Hyang as written in inscriptions Belitung Sigaligi Mawayang for Hyang, Macarita Bhima kumara translation: hold puppet to Bima tells Kumara in Mataram Hindu time from India and it was written in ancient Javanese king in the Darmawangsa in 996 - 1042 AD. The Mahabharata is Sanskrit assembled into 9 Parwa ancient Javanese languages, then Arjuna Wiwaha was successfully prepared by Mpu Kanwa at the time of king Jayabaya, Kediri kingdom.

Mpu Sedah began compiling stories Bharatayuda then completed by Mpu Panuluh. Mpu Panuluh then constructs the story Gatutkacasraya Hariwangsa. According to Centhini's story, write by Jayabaya ruling on palm leaves is arranged like the blinds and put together with rope. At the time of the Majapahit Kingdom, Puppet is drawn on paper and is equipped with ornate clothing of the early 10th century.

In the 12th century AD was 'secularization' puppet stage one to begin formulation of various mythos, glorified of the king as direct descendants of the Gods. The 15th century was the start of phase two of globalization Javanese cultural influence of Islam, began to seep unnoticed and stood at the beginning of the 16th century Demak kingdom. There were many rules, that conflict with puppet Islamic teachings then broken puppet ordered to change some rules, immediate action by the trustees in Beber Prabangkara puppet worked quickly cooked up and again it made from buffalo's skin.